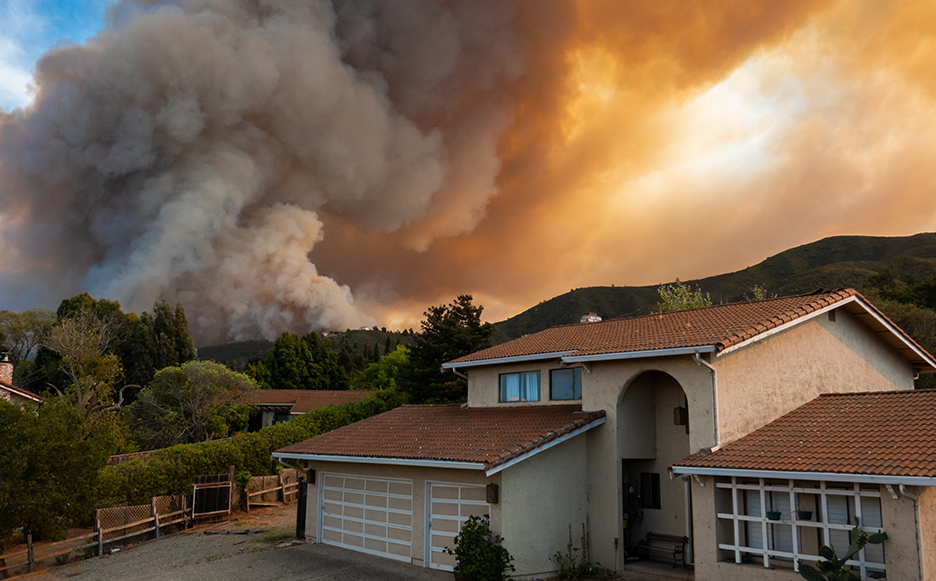 Wildfires can cause enormous human and financial costs when they reach Wildland Urban Interface (WUI) areas. The WUI is where human development transitions to wilderness, and homes are at much higher risk. About 40 percent of the US (or about 120 million people) lives in the WUI, and thousands of homes are lost each year despite major firefighting efforts that cost almost $5 billion annually.

What many communities don’t realize, however, is that WUI areas are growing, and more homes are in danger with each passing year. Fire seasons are starting earlier every year, and fires are affecting states that have never had to think about fires before.

“You may believe that you don't have a WUI problem, and that WUI fires only occur in western states, but more than 46 million residences in 70,000 communities in the United States are at risk for WUI fires.” — FEMA

To make matters worse, many local fire officials don’t have a complete understanding of what all can act as fuel that causes or increases the wildfire risk in the WUI. Many also inherit incomplete regulations to guide the management of these vegetative and structural fuels.

While wildfire damage is a growing problem in the US, there are steps that can be taken to minimize it. Fire marshals and legislators can continue to educate themselves about current WUI defensible space inspection programs and standards and how to incorporate them with other community risk reduction initiatives. These programs are becoming more common across the country, and understanding how to implement them can save countless lives.

Defensible space, the area between a building and fuel sources around it such as shrubs and trees, is a key component of wildfire risk reduction. When defensible space is of sufficient size and is properly maintained, it makes it more difficult for wildfire to reach a structure. When a fire approaches, anyone who hasn’t yet evacuated has more time to take action and the structure may even be saved.

Spending a little time to improve local property like this has a massive impact and one that can’t be overstated: giving citizens the ability to save their homes, family, and livelihood in the event of a fire. When communities ensure structures have a buffer of defensible space, they can prevent generations of hardship for affected communities and save millions in tax dollars.

That’s why many communities already mandate defensible space inspections by local fire agencies – and why many more would benefit from doing so.

The Federal Emergency Management Agency (FEMA) estimates that for every $1 spent on WUI prevention and mitigation, $4 is saved. FEMA says there is a simple solution to reduce wildfire damage: comply with the WUI building code. 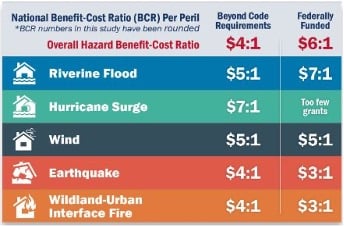 WUI inspection management includes defensible space inspections but is composed of much more. It’s all about taking comprehensive inspection measures, which now include not just traditional fuel management and inspection capacities, but are adding policies for home hardening, structure resilience, public evacuation plans, and shelter in place plans.

The loss of property, wealth, and the sustainability of a local community due to wildfires can be shocking, to citizens and governments alike. Rehabilitation for the affected people is often very expensive, and it takes a long time to recover from the damage, both financially and emotionally.

Because of this, the effects of repeated or prolonged exposure to wildfires can disrupt the lives of the local communities in ways that can impact them for generations.

Further, the loss of properties to wildfire equates to the loss of taxes generated by property values, tourism, employers, and school daily attendance revenues. An entire town's tax base can be devastated by a wildfire, which makes reconstruction harder, and can cause economic collapse. The 2018 fire in Paradise, California, for instance, burned the entire town. This included Main Street, commercial businesses, and homes.

According to the California legislature, wildfires have grown larger and have increased in intensity over the last several decades. Of the 20 most destructive wildfires in California history, 15 of them have occurred in the last 10 years. Compared to 1986, wildfires in the western United States happen nearly four times more often, burn more than six times the land area, and last five times longer now.

States like New Jersey, Massachusetts, Louisiana, Alabama, and Arkansas will likely see fire risks grow over 200% in the next 30 years. [source]

How to build support for mandatory defensible space inspections

While communities might be easier to persuade when wildfires are already getting too close for comfort, you don’t want to be caught off guard by not preparing in advance. Here are some best practices to build support for implementing defensible space inspections:

Bear in mind there will be a series of steps that are generally necessary before a mandatory defensible space program can be fully implemented, from raising awareness and educating the public (and legislature), to getting codes implemented and an initial program adopted.

Many people today realize they are at risk for wildfires only after they see the fire damage done in neighboring communities. Once they become aware of the risk, they start to educate themselves about how to reduce it.

As the demand for action increases, legislators start to hear about it. But by then, it may already be too late to get ahead of the danger. No legislator wants to be caught off guard by a wildfire, or blamed when a city or town is inadequately prepared for damage. They should act now to begin participating in community risk reduction by creating laws to protect lives, properties, jobs, and the local economy.

Similarly, local fire agencies must lead by educating the public and legislators about recommended standards and by initiating community risk reduction programs that have proven to be effective and successful elsewhere.

Communities that are aware and educated of the dangers (and preventative measures) are more likely to support legislation that would increase their community’s capacity to prevent and reduce the impact of wildfires. 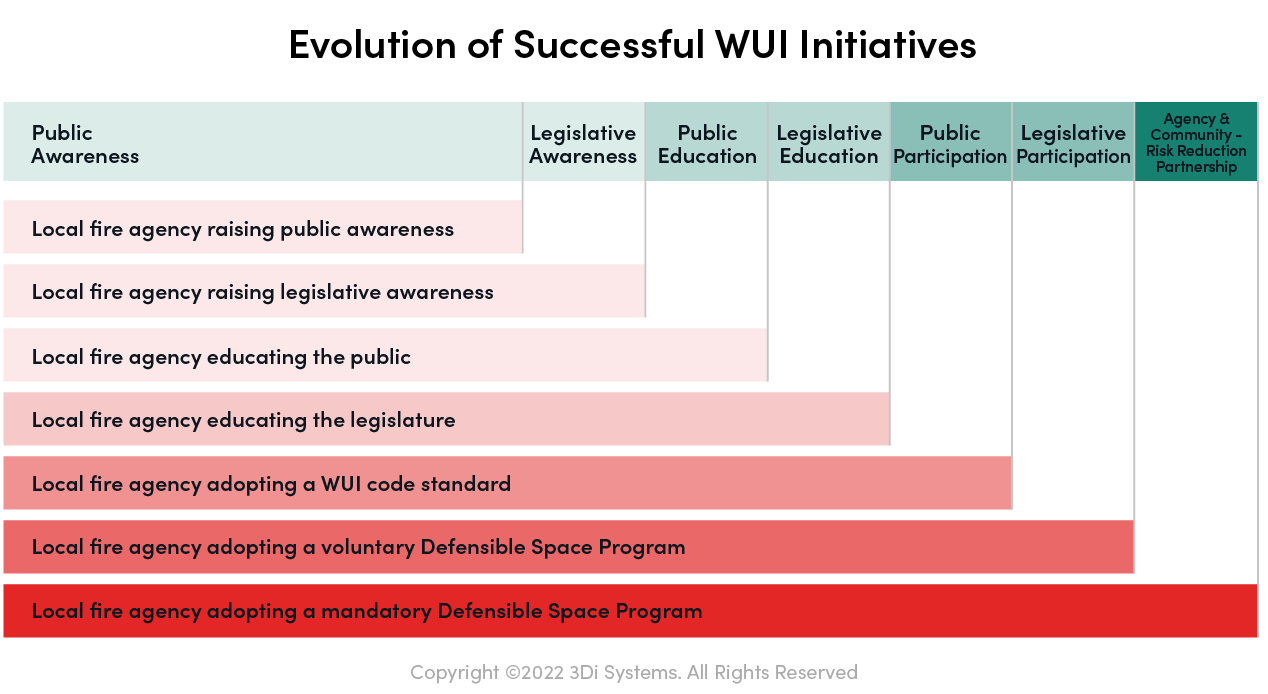 When planning out defensible space inspection program in your community, there are seven factors that will make your program effective:

Examples of cities that have implemented comprehensive WUI management

On April 9, 2020 the Austin City Council voted to approve the 2015 International Wildland-Urban Interface Code (IWUIC), making Austin the first major city in the state of Texas to adopt such a code. More than 60 percent of current structures in Austin are found within 1.5 miles of the Wildland Urban Interface (WUI), with more joining that group every day.

In 2008, the City of Flagstaff, Arizona adopted IWUIC with amendments. In 2012, Flagstaff residents approved a $10 million bond to fund community risk reduction activities.

Colorado Springs, Colorado, has developed maps of wildfire risk ratings, offers property owners free on-site consultations with the Wildfire Mitigation office to learn about wildfire risk on a specific property, and runs a neighborhood chipping program to dispose of tree branches and hazardous vegetation. Residents also can receive a tax credit for the costs incurred from wildfire mitigation measures.

The town of Payson, Arizona took inspiration from California and Colorado, and adopted an IWUI code in August of 2020. This code requires all properties to meet defensible space requirements. Vacant properties are required to mitigate the perimeter at least 30’ in from the property line to zone 3 standards or come up with a mitigation plan approved by the Chief. The code allows the Town to either cite the property owner or mitigate the property and file the cost as a lien.

Modern technology is playing a major role in reducing the labor costs of managing successful WUI programs. For many years, we’ve been helping fire departments incorporate modern technology into their community risk reduction program, becoming more efficient in the process. What used to take weeks to accomplish is now only taking days.

Our specialized and expanded WUI software application functionality allows the inspector to carry all of the information they need to accomplish their goals into the field. This includes their entire inventory of at-risk WUI properties data, satellite imagery, geo-spatial property boundaries, digital code books, and owner-of-record property data at their fingertips on smartphones and tablets.

This may require getting buy-in from the community, which is not always easy when the threat of wildfires doesn’t seem pressing. But if recent years have shown us anything, it’s that the threat is far more pressing than some realize. It’s up to us to convey the risk and ensure our communities are using every tool available to reduce it.

Ready to learn about the modern approach to fire prevention management?